The Inquiry in Paris Part 2

Many members of the Inquiry would parlay their work with the Inquiry into illustrious international careers later working with the largest American foundations in the specific areas of social research and applied science. Many would go on to preside over major American institutions, reaching key leadership positions in all aspects critical to the management of society. They were instrumental in creating entire fields of discipline we now simply take for granted. Bowman integral in the International Map of the World Project that has directly led to our present day global surveillance grid would later be involved in the Manhattan Project as president of Johns Hopkins University. Shotwell, working for Carnegie Endowment was, even according to his Columbia University alma mater, “present at, indeed instrumental in, the creation of some of the most important international institutions of the twentieth century.” Two other inquiry members, William Curtis Farabee and ethnographer Roland Burrage Dixon were both presidents of the American Anthropological Association, Farabee’s work primarily in human genetic research and Dixon on the racial history of man. Leonard Porter Ayres a very early Inquiry recruit, headed the American Statistical Association, Ayres an acting chairman within the Skull and Bones executive arm Russell Sage directing voluminous studies on the casualties of war, “backward children”, and the lazy of society. His large-scale statistical projects on behalf of Skull and Bones, very reminiscent of the Fabian social reform ideas published by Sidney and Beatrice Webb, Graham Wallas, and George Bernard Shaw.

Inquiry member Charles Homer Haskins was a child protégé teaching at Harvard at the age of seventeen and the first academic renaissance and medieval historian in the United States, he worked for years with the American Historical Association, a corporation of university teachers of history, before becoming its president. Haskins was a leading member of the Committee of Seven, where he set standards for college admission and national public school history curriculum and was the chair of the first American Council of Learned Societies, bringing together a nationwide network of historians and was Dean of the Graduate School in the Arts and Sciences from 1908 to 1924. In Paris he was a key personal advisor to president Wilson. He was an American member of the Commission on Belgian and Danish affairs and helped arrange three historically contentious and economically important areas along the German French border in Alsace Lorraine, and the Ruhr and Saar Valleys.

Allyn Abbott Young, the president of the American Statistical Association, the American Economic Association and the London School of Economics wielded a wide circle of influence similar to Haskins. Mark Jefferson was a leading pioneer in American cartography at the time of his hiring and was hired by his former student Isaiah Bowman as chief of Geography and Cartography for the Inquiry. Jefferson today is still considered one of the most influential of all American geographers. All of these men of the Inquiry sharing the same progressive, socialist school of thought of a future society of peace achieved through an international, technical expertise.

With the creation of the Inquiry was founded the very profession of scholarly counsel of government from out of the necessity of war. The Treaty of Versailles, despite all of its liberal promises, proven now to be less the end of all war and more the start of the next. The conference was Prompting Pilgrim Society member and American delegation member Frederick C. Howe to state,

“economic forces moved the conference, like players about a chess-board. Boundary-lines were shifted to include harbors, copper, oil, mineral resources. Races were split, natural demarcations ignored. The imperialist interests that had kept the world on edge for thirty years before the war were making a killing…The British Admiralty wanted oil; it had talked oil for years. British maritime prescience saw that oil was the fuel of to-morrow. The French steel trust wanted a grip on coal and iron oar, to gain command of the Continent and strip Germany of her war-making power. Munition-makers were busy. They were getting ready for the next war.”

Nothing short of American sponsored global chaos the exact kind of which Wilson first protested against and then himself became, when refuting the Popes call to belligerents for a “peace without victory”.  Wilson, doubling down, went for the German throat stating in response, “the object of this war is to deliver the free peoples of the world from a vast military establishment which secretly planned to dominate the world” further promising to the world that America would “deliver its blow fiercely and quickly”. But one hundred years later, the History of Propaganda asks, who possesses this “vast military establishment”? Who is it that the free peoples of the world need to be freed from? And, who is it that has consistently, in the over one hundred years since exhibited the behaviour indicative of a foreign policy bent on world dominance?  Today there remains only one clear answer to that question.

In Paris we see the interests of many factions aligning that had nothing to do with the ending of world wars or making the world safe for democracy. Atlanticist interests of the Round Table Group aligning with that of the Internationalist. The Edwardian era imperialist and Old World French colonial interests aligning with that of the Wilsonian Progressive with that of the Zionist, And despite their perceived differences, these men mostly members of the private Century Club, or the Coefficients Dining Club, and the Pilgrims Society. The long ago made plans of private elite society culminating at The Palace at Versailles, in the Hall of Mirrors.

Many of the men on both the American and British delegations having shared these less public allegiances that extend well beyond that of delegation or even national loyalty. They are the motor that drives the Anglophile narrative, unfettered from party affiliation and government bureaucracy who’s work was “about bringing Britain and the US together as the two ‘great manufacturers and traders of the world, and therefore the great advocates of international peace.”(3) Nearly the entire American and British delegations were made up of members and friends of one or several of these secret societies and gentleman’s dining clubs. This the elephant in the room of American life. A small coterie of elites rule this world through the coveting of money, influence and power. Pilgrims founder Charles Beresford believed in an, “‘Anglo-Saxon patriotism’ which was in addition to our domestic patriotism and our Imperial or American patriotism'”.

This group of elites with anglophile dreams heavily represented in Paris. The conference in fact largely steered by them. When we identify those most influential at the conference they call come from these secretive private clubs: Elihu Root, Henry Stimson, James Bryce, Lord Robert Cecil, Lord Edward Grey, Philip Kerr, Thomas W. Lamont, Lord Alfred Milner, Lord Northcliffe, Frank Lyon Polk, Winston Churchill, John Foster and Allen Dulles, and Henry White were all influential in the creation of the League.  But the Pilgrim’s Society membership also includes Wall Street legend JP Morgan who famously loaned hundreds of millions of dollars to the French, British and Russian armies and was represented in Paris to get his money back. American royalty well represented within these society clubs, the Aldrich’s, the Astor’s, the Vanderbilt’s, the Whitney’s even Queen Elizabeth II, Prince Philip, Prince Charles, Prince and Andrew, are all members. Making for a very influential membership list first inspired by its most honourary member, Cecil John Rhodes.

Here we see the very obvious fascist takeover of America. Corporations are by nature expansionist and align well with a foreign policy with the same initiatives and the think tanks created then meant to steer society as a helmsman would a ship. The not-for-profit think tank designed to transcend political party, their whole creation meant to be bipartisan and apolitical, to gather members of all parties, to transcend the quagmire of the voting process and to get beyond government bureaucracy. The introduction of these institutions left little doubt to those watching then what would eventually evolve out of such an ill thought-out plan. We witness its results in real time today as the CFR and RIIA both drive narratives domestic and abroad, admitted as an authority by the very politicians they direct.  An effort by our social engineers to form societal order out of chaos using dialectics was the plan.

So, in the end, as the Big Four walked the Place de Concorde to the admiration of the media and the headlines of peace spread around the earth heralding Wilson, Lloyd George, and French Prime Minister Clemenceau as the new fathers of victory, these lesser-known men of the Inquiry, hidden in the shadow work of statecraft, far from the glare of flash cameras, intellectual scholars responsible for creating a shadow government within the Woodrow Wilson administration that has existed ever since, emerge to the modern day historian as the prime movers in Paris, the men of the Inquiry without a doubt, the most influential men of action at modern history’s most influential of peace conferences.

Century Association logo. All three presidents of the 1912 election were Centurions. Two of which considered founding fathers of the Progressive Era. 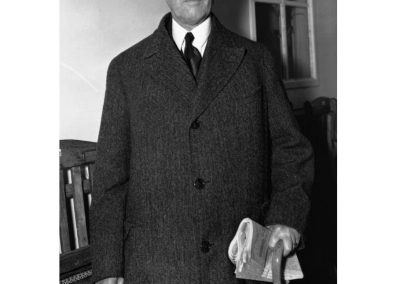