The Inquiry – The First All American Experts and Founding of CFR

“The Peace Treaty was not to be a return to the old diplomacy, but the establishment of a new world order.” James T. Shotwell, Inquiry/CFR founding member. 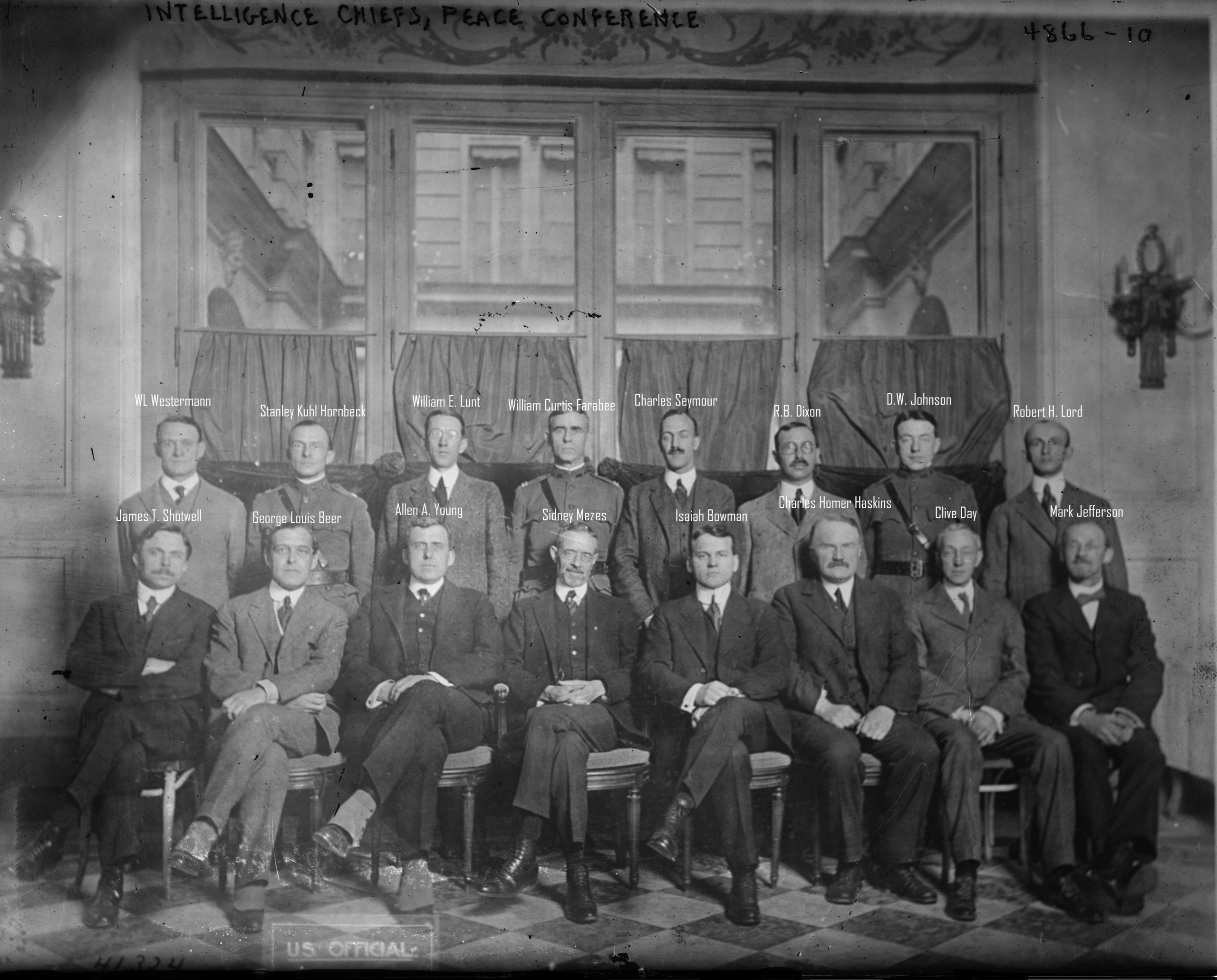 In early August of 1917 while the war raged in Europe, Third Assistant Secretary Breckinridge Long sends a memorandum to Secretary of State Robert Lansing in Washington, calling for a “bureau to be established for the study and preparation of those questions which appear likely to be proposed at the Peace Conference”.  The memo came on the recommendation of Frank Lyon Polk and Felix Frankfurter -in France since early July – and inspired by similar British and French foreign diplomatic efforts already underway. The memo was a call for America to begin preparations for peace talks – some 15 months prior to the signing of the Armistice.

By October an ad hoc organization was discreetly working parallel to the Wilson Administration in upper Manhattan – a group known as the Inquiry – directed by Wilson’s key advisor, Colonel Edward Mandell House while leading progressives Louis Brandeis, and the founders of the New Republic magazine: Walter Weyl, Herbert Croly, Felix Frankfurter and Walter Lippmann, all had significant influence. Wilson, who’s reelection less than a year earlier was largely built on the campaign slogan “He Kept Us Out of War”, was now planning for peace.

“The cooperation with the British and French Governments was, of course, on a different level, and we had cordial and intimate relations with some of their diplomatic and technical staffs in Washington and New York. … Lord Eustace Percy, an intimate friend of some of the Inquiry members, was especially helpful in securing documents and information from the British side, a service we were later to return in kind.” AAPC pg 11

“It was in a quiet part of New York where one would hardly expect to find the staff of the personal adviser of the President preparing materials for world policy” James T. Shotwell

The Inquiry’s inner circle consisted of five founding members: personal aide to Wilson, Colonel Edward Mandell House; New Republic co-founder Walter Lippmann; Columbia history professor James T. Shotwell; international law expert David Hunter Miller, and House’s brother-in-law Sidney Mezes.  It quickly became apparent that with the “vast field that would be covered by the Peace Conference”, the small rooms reserved for their work in the New York Public Library would be insufficient. It was the first task of Shotwell’s to gain the “co-operation of university men … drawn from the highest academic capacity in the country.” And it was agreed upon by the early founders to “enlarge the organization by adding colleagues in the various political and social sciences.” The personnel for this “strange experiment” came almost exclusively from three Ivy League Universities: Yale, Columbia and Harvard.

Early Inquiry recruits were Archibald Cary Coolidge; Charles Homer Haskins; George Louis Beer; Charles Seymour, and in November the Inquiry found their Chief Territorial Specialist and Executive Officer, in Isaiah Bowman. Bowman, as the Director of the American Geographical Society, had at his disposal, some of the best cartographic equipment for the preparation of maps in the entire United States. A graduate of Harvard in 1905 and Yale in 1909, Bowman had already led three South American reconnaissance Expeditions for the Yale Corporation, making world-wide headlines in 1911 rediscovering Machu Picchu with Hiram Bingham. Bowman created the Geographical Review in 1915 and remains today as one of the three pioneers of American geography. He was a founding member of the Council on Foreign Relations and board of director until his death in 1950.

With Bowman aboard, the Inquiry had found their leader and the American Geographical Society building at 3755 Broadway, for the next thirteen months, would be the Inquiry’s headquarters. This chosen location convenient in that Shotwell at CU, Mezes at CCNY, and Bowman at the AGS were all within four subway stops of each other on the Broadway line in upper Manhattan. The Inquiry, as it was officially known, was purposely ambiguous in title, helping to ensure their work “would be perfectly blind to the general public, but, which nevertheless, would serve to identify it among the initiated.” The name was “adopted at first only provisionally” at Shotwell’s suggestion, but “later retained by the paradox that its very inadequacy was its best recommendation”.   The Inquiry’s membership would eventually grow to include over one hundred and fifty academics. And by early December of 1918, their thirteen-month long intelligence gathering project culminated when all of the Inquiry’s Division Chiefs accompanied the President aboard the USS George Washington, as his personal advisors, a front row seat on Wilson’s historic trip to the 1919 Paris Peace Conference.

The reports created in the year long period prior to the peace talks, along with the hundreds of carefully hand-drawn maps, diagrams and graphs, proved invaluable at the meetings in Paris. This marks a historically significant moment in American history, “for never before had universities been mobilized for such a service”. Never before had a private group of scholars been appointed as direct advisors to a US president and never before had a sitting American president relied so heavily upon such a group. And this would cause friction within the State Department, especially with the Secretary of State, Robert Lansing. The DoS feeling that this new approach violated already established foreign policy protocol. Shotwell implying later that it may have even been illegal:

“Even before the Armistice there had been some indications, although none of them serious, that there were those in the State Department who were by no means happy at the way in which the preparations for the Peace Conference were being made. This was not only natural under the circumstances but, from a standpoint of public law, had apparent justification … In their eyes it was one thing for the President to have a personal adviser in Colonel House, but quite a different thing for the Colonel’s staff to develop to the point of displacing the established governmental organ for foreign affairs. … “

“Technically it was connected with the State Department but really it was to be the President’s personal staff under Colonel House’s direction.”

“There was a hint of this broader conception [social justice] of the purpose and scope of the International Labor Organization in the preamble to its constitution, in the statement that universal peace ‘can be established only if it is based upon social justice.’ It must be confessed, however, that when we wrote those words into the text, we were not thinking of their far reach, but of a formula which would enable us to tie our institution into the structure of that new world order which the League of Nations symbolized.”

James T. Shotwell, founder member of both the ILO and Inquiry At the Paris Peace Conference pg. 54

Of the fourteen Inquiry members in the photo all of them had an extensive background in the social or political sciences, ten had either a Bachelor’s or Masters in the Arts, or both. All attended Ivy League and many rounded out their scholastic career by studying abroad at European universities. The Inquiry membership was made up of economists, historians, statisticians, and lawyers all with a liberally progressive common interest. Many of these men graduated top of class, their early fraternal allegiances helping make for a graceful transition into elite high society later in life. This network of gentleman clubs hidden within the undercurrent of American life, however their immense influence self-evident and remains even today as the main determining factor to the quality of a man’s career.  In this system, the best and brightest are earmarked early in their education and coveted specifically for their intelligence. They are then moulded and their careers shaped to the benefit of their handlers. The Western education system, borrowed from the Prussian reformation, acting as a filter creating the inevitable caste system we live in.

Today, this blind reliance on the expert seems to be the norm. The majority of people believing the world’s complexities exist beyond their comprehension, commonly concede their opinions to the expert.  Few see how this dependency has led to a largely apathetic and vulnerable public.  Even fewer still, see how this vulnerability can lead to the catastrophic fragmentation of Western democratic society. The think-tank lies at the center of this movement to shape and engineer society through manipulation. And Walter Lippmann, heavily influenced by what he experienced in Paris, wrote his most famous book on the “manufacturing of consent” And in Paris, we see the birth of two of today’s most influential and powerful persuaders of public consent in the Council on Foreign Relations and her British sister, the Royal Institute of International Affairs born conjoined forever bound in the backroom suites of the Hotel Majestic during the Conference. The expert opinion so prominently used today, we see being implemented for the first time, by executive orders, the rise of a “rival staff” of unelected experts guiding the president “at the most critical, and even revolutionary, turning point in the history of American diplomacy”.

The truth is that this reliance on the expert has evolved for generations outside public consciousness, the public largely unaware to its dangers. And under this anonymity, the many and varied offices within the United States Intelligence Community (IC) have now grown to include all aspects of society: the military establishment, Silicon Valley and social media, Hollywood entertainment, American academia, and the mainstream media. All working together to create narratives that fragment our collective perspectives on reality. Leaving us in large part as if paralyzed on narcotics and unable to act. A suspended land of confusion. This technique of persuasion, so obvious today, first realized in Paris by the very men that would found propaganda, public relations and modern journalism directly inspiring the likes of Mussolini, Hitler, Stalin and Vladimir Lenin.

The 20th Century Ideal society they were attempting to engineer in Paris through experimentation has in reality, turned into a 21st Century science fiction nightmare. We see, through the advice of these internationally minded movements, the merging of traditionally separate aspects of Western society. Public private partnerships, non-governmental organizations, think-tanks, not-for-profit foundations, lobbyists, despite being thought of by the general public as benevolent, all hold zero appreciation for Western traditions and values. Internationalism by its very definition repugnant to the spirit of closely held Western traditions of liberty and individual sovereignty. These corrupted institutions then are left to run roughshod for generations under the guise of humanitarianism and our nation states, long subservient to these false, fragmented narratives, are left to participate in their own downfall. And we, as the children of the future – those very generations the Paris Peace Conference was so concerned with, stand as the ultimate final judge of their social science experiment.

“Some day the Inquiry will find its historian, and this strange experiment in the mobilization of the political and social sciences to help in shaping the outlines of the new world structure which had to be built out of the ruins of the war will offer a subject with unique possibilities.”